The curious case of Steve Rice

Almost like Windows 7 – arriving before anyone expects it – a new blog posting from Stian. By pure coincidence related to earlier postings about pizza and names. Mainly written on my sturdy Nokia N80 telecommunication device while on the road, carefully transmitted by blue radio longwave to the blog typewriter unit — no need for iPhone, Twitter or Facebook for this young and modern travelling correspondent.

I’m standing in the waiting area of Lou Malnati’s, a pizza restaurant in Chicago well known for its deep dish pizza, even listed as restaurant #36 in Chicago at TripAdvisor. Not bad for a pizza place! Of course I’m lazy and went to the Lou in walking distance from my hotel instead of the #36 one, but I’m still hoping it will be a pretty decent pizza, as there’s a 40 minute waiting list and more people keep arriving from the street. Lou’s pizza is apparently so good that they are not restricting themselves to Chicago city boundaries – they ship frozen pizzas all over US — overnight using UPS! (some dry ice might also be involved)

So there’s a waiting list, and I sign in under my pizza name. What’s a pizza name? Well, I don’t particularly like spelling Stian Soiland-Reyes every time I am ordering a cab, pizza or anything else that should not really require me to give away my full name. They usually don’t care what your actual name is anyway, they just use it as a reference for when you call back 60 minutes later with an inquiry into the whereabouts of the promised wonder. (The reply is always on its way! - but still – we have to call to make sure!)

The point is, I have come up with a name that most English-speaking customer service representatives should be able to both spell and pronounce. Enter Steve Rice. Forget about Chinese takeaway for a minute – look: Stian—Steve, Reyes—Rice. Even the initials are almost the same, it should be obvious it is me! (How do you do initials with a double-barrelled name like mine anyway? SSR? SS-R? SSr? S-R? All of them look cool! And imagine my wife’s initials, CGS-R! It sounds like some teletransportation system in Star Trek!)

As I carefully avoid to spell out my pizza name (that’s the whole purpose), the waiter replies Welcome Stephen! Are they messing it up already, or is he just trying to be nice..? I take a relaxed sip from my Goose Island 312 Urban wheat ale (made in Chicago of course).

There’s a small gathering of awaiting diners standing with me in the waiting area. I notice all the other guests are drinking the local lager Blue Moon, not 312. A big family arrives and seem to be negotiating with the host, they are asking for a table for 6 even if they are 7 in the family, to shorten the waiting time.

I am reminded of Christmas with the full family at my grand mother’s house. She would do all the preparations and cooking herself, put the table clothes and set the table beautifully, with all the little details in place such as those special little forks for the gherkins. But as the dinner is served we realise she has forgotten or deliberately avoided setting the table for herself, so she would sit alone in the coach with her plate on the little coffee table.

The crowd in the waiting area is waking up, some are peeking at the clipboard of the host. A big gang of 8 has just left the restaurant, two tables have been freed, we’re all very excited on who’s turn it will be.

They call a table for two for Jasmine, a Chinese girl whose real name probably was something closer to Xin Jing. As the charming maître d’ then starts running around the room, frantically shouting for Susie, party of four, the tall guy behind me (signed in as Smith for the evening) regretted his not very imaginative choice of pseudonym and wanted to be Susie instead. I acknowledged I was not alone in going under an alias in the dark streets of Chicago this stormy Friday night.. I was thinking in black and white already, just missing that saxophone and the lady in red knocking on the frosted glass door.. Steve Rice, Private Investigator.

I’m seated now, they called for the mysterious Mr Rice.  Or more precisely Steve R as they prefer in this parlour. Should I correct them for not using my carefully planned pizza name? Will this perhaps be my new fighting ground now that I no longer reply “Please note my new name and email address” to every electronic correspondence addressed to my maiden name?

I look around, it’s all couples around me. I am missing my wife. In the old days (at least according Richard Feynman) you could always bring your wife on a business trip. Academic conferences used to have a special entertainment programme for the wives, while their professor husbands closed themselves into a dark room, smoked cigars, discussed and did lively presentations just by talking, without any PowerPoint.

However, in this modern and of course much more equal world, both husband and wife are forced to suffer. Luckily the advances in technology means that one can now send the loved one a videogram with good night wishes, using an ether communication medium called Skype. But here I am, sitting on a table for four, all alone. I look up — the waiter has considerately placed me right in front of the big TV showing baseball. Perhaps Steve likes to watch sports..?

I order the house salad as a starter, but I do not need to specify my entrée (in US the main course is called the entrée – a bit peculiar given the typical US serving sizes of “appetizers” (starters) and main courses). The reason for this is that I had to pre-order my choice of pizza while waiting to be seated earlier. I can fully understand the need for this, as there was a wide range of selections between 4 different pizzas in the menu.

For some reason it was not possible to pre-order the salad at the time, perhaps Lou is betting on the hungry patrons to order an oversized pizza when they are entering the establishment, and when finally seated at their designated table they would be tempted to throw in some salads and garlic breads when placing their order.

I do not fall for such simple tricks — in fact I order the 8″ individual sized vegetarian pizza called simply Lou. Even after 4 years in UK I’m still not used to these imperial units, so I was just betting that 8 inches would be big enough. I am estimating the pizza will be something in between a 5.25″ floppy and a 14″ EGA screen.

The salad and pizza arrive, and although I am bewildered by the tinyness of the pizza, it’s both filling and tasting. The pizza has spinach, mushroom, sliced tomatoes and cheese, the salad comes with a big bowl of Roquefort dressing. It’s hard to find anything vegetarian in US that does not have cheese, in fact it’s hard to find anything at all without cheese — if you can really call it that. However the food at Lou’s is great. 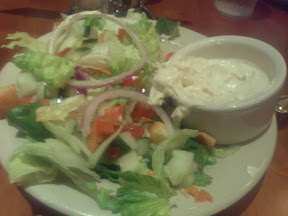 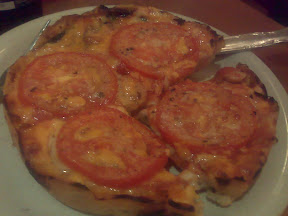 As I’m signing the check I’m trying to do the tip calculation right. In US, the expected tip has inflated to something horrible like 18%, so I was going for a 20%. I remember from earlier US trips that the tip is to be calculated on the pre-tax price, so I am clever and use the calculator application on my phone to calculate $15.75 * 1.20. 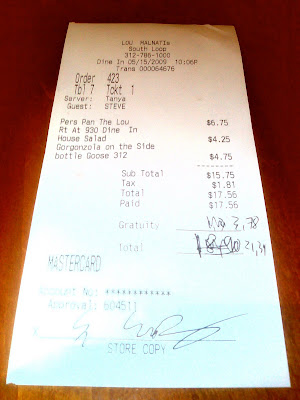 On the way back I get back into the film noir mode of Mr Rice, PI. I look up, and a train passes above me on those cool elevated rail lines that you see in movies like Batman and The Spirit, or in computer games like Grand Theft Auto. There’s even a yellow cab cruising slowly in the narrow alleyway underneath the rails. There’s steam coming out of the top roof of what used to be the hotel, but in black/white the building looks more like some kind of Arkham Asylum monster building. 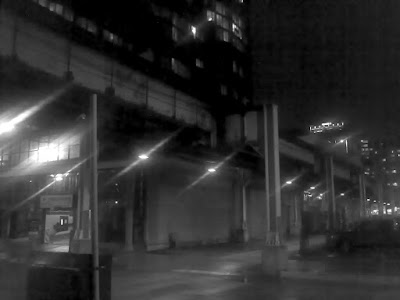 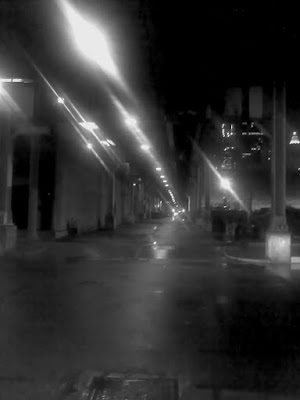 Steve Rice throws his cigarette to the ground, his rain coat is fighting against the wind. Rice sighs. 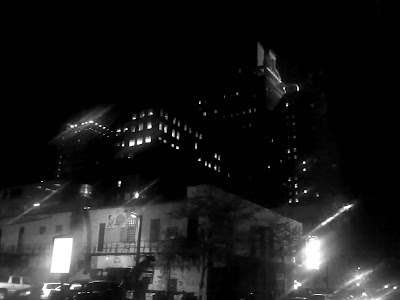 And a slightly related clip from BBC, Your name, sir?